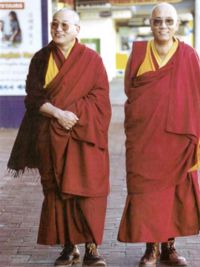 Welcome to the home page of the Dhargyey Buddhist Centres!

The original Dhargyey Buddhist Centre in Dunedin is a charitable trust founded in 1984 for the study and practise of Buddhism under the guidance of the senior Tibetan Lama, Gen Rinpoche, The Venerable Geshe Ngawang Dhargyey. To our immeasurable loss he passed away in August 1995. Since March 1996 the Venerable Jampa Thupten Tulku has taken over the role of spiritual guide. A commemorative stupa has been built for Gen Rinpoche and it was finished and consecrated by His Holiness the Dalai Lama in September 1996.

The Dhargyey Buddhist Centre is located within a few minutes walk of the centre of Dunedin, a university city with a population of about 115,000 in the southeast of the South Island of New Zealand.

At the Dhargyey Buddhist Centre, regular meetings and classes are held at the Centres covering Buddhist philosophy, meditation and practice. All classes are free and open to the public. There is a shrine room for meditation and a small library of books on Buddhism, Tibet and related topics. The Centre is open whenever there are classes.

Contents of this Web site: (select a topic)